Will wanted his touring bike to fit 700c wheels. 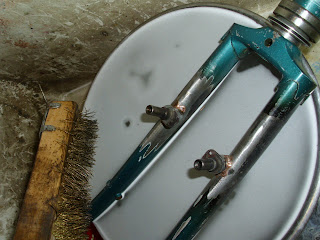 Here's how we made it happen:

There were other options; different brake combinations, etc. But, Will had made up his mind; we would move the mounts to fit a 700c.

First I got the bike and cleaned off most of the paint around the cantilever bosses with a flap disc, and sanded out the rest.

Then I used the torch to heat up the old filler metal (aka de-braze) and pulled the old canti's off with pliers.

Next, we filed/mitered down the new bosses to better fit his frame and forks. 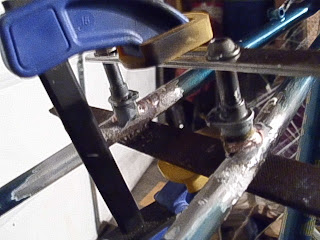 Shimano recommends spacing your mounts at 65-75mm, center to center. His old mounts were more like 45mm, hard to even get a big tire through. Since the mounts we had were cut for wider frames, and we were already better off than when we started, we went with a 60mm gap and saved some time and work.

I first set up a wooden jig, that i used to tack weld on Roody's bike before brazing. Since I don't have a welder in the shop yet, that didn't wotk (re: burning wood jig) so in a brainstorm I asked around at work the next day and Tom suggested using a rack mount to hold them in place. 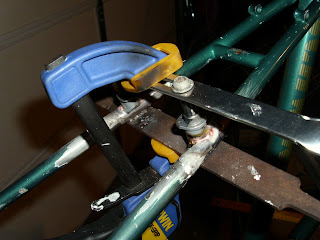 Brilliant! Also, adjustable. I had to file out the slide to fit the M6 bolts that are required for mounting your brakes, but after a little elbow grease it all came together beautifully!.

The first couple of times I mounted them I used the filler metal that came with the mini shop Oxy-Mapp brazing kit I had just gotten. That stuff just peeled right off (I should have known better) so after asking around, I discovered Jesse found 54% silver filler wire at the Welna's Hardware store!

After re-cleaning and re-brazing with proper filler, They stuck like they should. Permanent-style.

And Will rode off into the sunset on the way to St. Louis, forever. Bye Will, hope you had a great trip!
Posted by Unknown at 10:45 PM No comments:

The Dancer for Jamison

We are also happy to help you with any repair or modification project. Please call/email details and photos.